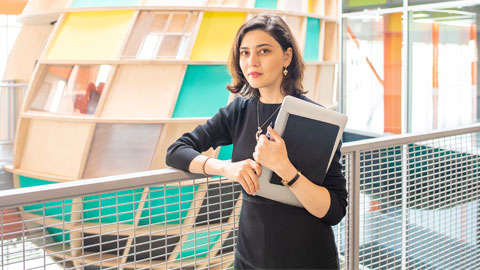 Zamira studied Entrepreneurship and Innovation Management and graduated in 2018.

Zamira was a Country Director of Imagine Center for Conflict Transformation prior to her studies where she was responsible for designing and managing programs related to mediation and conflict transformation in post-war societies like Azerbaijan and Georgia.

Why did you choose to study at Loughborough?

Loughborough University was only one of the three choices I had. I wanted a dynamic university with cutting edge curriculum, practice bound modules, with an international community. And Loughborough matched with all three criteria.

The modules are taught by multiple experts looking at the subject from variety of aspects instead of singular theoretical approach. The second favourite part of my studies was the LEN community who encouraged me to practice what I have learned by setting up my own enterprise.

Why did you decide to study your course?

I was working with vulnerable communities affected by war in two different dimensions: youth groups, women groups, unemployed army of fathers and mothers who were solely depended on the government resources and foreign organizations to sustain themselves and domestic and foreign organizations who were having hard time to find sustainable funds to support these vulnerable groups. In both cases, I figured there is a pressing need to find sustainable solutions and entrepreneurship seemed to be a good tool, that's why I chose Entrepreneurship and Innovation Management MSc.

What was your favourite module?

The Collaborative Project was my favorite among others. Although it was challenging a challenging module to work as part of a group of people that I knew nothing of, but it was also the most propelling experience to put our heads togehter and tackle the challenge the company gave us.

What did you enjoy the most about your programme?

Learning from people who are practicing what they know in the field and talking about their experiences in the classroom.

What was your most memorable experience on your course?

Anything to do with Careers and Employability team was memorable. Ben and Tim's tireless efforts made every experience memorable - they were all rich in learning and practical opportunities and full of adrenalin. Hackathons, venture crawls, business challenges, workshops, and trips...it was an amazing experience, I learnt a lot, and made lifelong friendships along the way.

How did you like to spend your time away from your studies?

Time away from my studies was time to practice my learning. I worked for a social-enterprise called TERN (The Refugee Entrepreneurial Network) that trains refugees in the UK on entrepreneurship to give them a chance to transform their passion into a commercial practice. I was able to practice what I dreamed of by choosing this school and this course.

What piece of advice would you give to a future postgraduate student?

Spend time learning about your friends - those on the same programme and those who aren't. There is so much potential in each student that we do not get to necessarily hear about throughout our studies. There are so many interesting people from so many countries. Don't miss a chance to stop any of them and ask questions. Throughout my studies I learnt from my group of friends as much as I did from my lecturers, so don't miss the opportunity! Also, don't forget to regularly check your student email account as I found out about the opportunity to work with TERN through an email from the Careers and Employability team.

How has Loughborough University London inspired you and helped you to progress in your career?

When I came to Loughborough I knew almost nothing of entrepreneurship. I knew I wanted to help women of the world to acquire entrepreneurship as a tool for economic independence and sustainability but I did not know how to do that. Loughborough University London not only provided me with all the knowledge I needed, but also gave me practical experience, networks and challenged me to go beyond my comfort zone.

Through Loughborough University London I was introduced to The Refugee Entrepreneurial Network (TERN) and became a buddy, and later a Team Manager, to a refugee. Thanks to Loughborough University London I realised my that education of entrepreneurship intertwined with social enterprises like TERN is all I wanted as a job, and provided a sustainable cause to contribute to.

Tell us about your career journey so far.

After studying post-war rehabilitation and reconstruction, I been involved with mediation between conflicting nations, human rights activism, peace journalism, refugee humanitarian aid and livelihood programs etc. and I have always worked for organisations that helped refugees. It did not take me long to understand that the best way of helping them is not giving them things, it is helping them to stand up on their own two feet no matter how hard it is. Then I arrived at Loughborough University London, where I learnt all I needed to know about entrepreneurship.

Tell us more about the organisation you are currently working for.

DELITELABS is a sister enterprise to TERN based in Amsterdam, Netherlands. Like TERN, it offers business training and mentorship to refugees in the Netherlands who are ready to lay out their own path.

Refugees all over the world are struggling to keep up with expensive living standards of the new world they become part of. Government resources can often be barely enough to lift them off the ground and they need to start a new career in a new country with disrupted life goals and severely damaged self-esteem. What can be a better way of holding them up to see a colorful future in the entrepreneurial path? Nothing is more fulfillng that watching them start their own enterprise that incorporates their passion and the lifelong experiences they have brought from their home countries and see them succeed independently.

TERN and DELITELABS are both experts at changing the lives of these refugees and that is thanks to Loughborough University London that I am part of this growing family.

What do you love the most about your current job?

My current job allows me to see light in the eyes of these refugees who realise that the future can be colorful and fun too. It does not have to be a boring low-level job that gives nothing to these refugees in new countries. Entrepreneurship gives them hope and confidence that is born out of their own passion and dreams. That's what I love about my job - seeing refugees having fun while building their own future.

What has been the proudest moment of your career so far?

My proudest moment in my career so far was when TERN nominated me to the Women on the Move Awards commissioned by UNHCR and Migrants Organize.

At first, I thought I am not someone who deserves this. There are thousands of women who work in more gruesome environments than me, they have no resources and every day is a struggle for them.

During the interview for the award, the panel asked me why I thought I should win. I thought of the women who are doing this job and never receive recognition and I said "I would like to win the award for empowering others that think they are invisible. I want them to see that we who do the service are not invisible, we are seen."

I became the Young Woman of the Year 2019 and stood on the stage among other fabulous women and accepted the award for all the women around the world who struggle every single day. I was their manifestation and I felt proud of my own path as a refugee.