Apply now
Sign up for emails
Open days and events

Our Diplomacy, International Business and Trade MSc provides an extensive overview of the practices of international business diplomacy. The challenges of trading in the global village, and the multiple communities and markets driving world commerce through new and old trade routes are dissected in this programme.

You will learn in an environment tailor-made for the development of the skills needed to critically understand globalisation, as well as the knowledge of the current issues characterising relations between diplomacy, international business, and international trade.

Our master's in Diplomacy, International Business and Trade will provide specialised, systematic and in-depth knowledge of the study of and the relationship between diplomacy and international business and trade deploying appropriate theories, concepts and methods associated with the specific subject area.

Why you should choose us

Why you should study this degree

Institute for Diplomacy and International Governance

Hear from Bryn about studying within the The Institute for Diplomacy and International Governance and what postgraduate life is like at Loughborough University London.

The following information is intended as an example only and is typically based on module information for the 2022/23 year of entry. Modules are reviewed on an annual basis and may be subject to future changes. Updated Programme and Module Specifications are made available ahead of each academic year. Please also see Terms and Conditions of Study for more information.

You will learn from the most influential thought leaders, pioneering researchers and creative innovators, exposing you to the latest theories and developments from across your discipline.

Diplomacy in the Digital Age

The aim of this module is to introduce students to the evolution and change in diplomatic practice in the contemporary digital age through a range of cases and issues from across world. The main objectives are:

A) To equip students with theoretical approaches, concepts and debates enabling the critical interrogation of diplomacy in the digital age; its promises and its drawbacks; and its relationship with power, knowledge production, networks, gender, voice, and communication; while also critically appraising the relationship between digital diplomacy and democracy. In so doing, it aims to uncover the role of both state and non-state actors (individuals, activists, journalists, influencers, diasporas, charities, corporations, minorities) in digital diplomacy demonstrating that widening engagement means widening the agenda.

B) To showcase skills and various ways of being a diplomat in the contemporary digital age, through introducing and unpacking the real-life applications of such skills and ways, integrating practitioner contributions where possible; as well as through examining various and often overlooked pathways of practicing diplomacy (such as public diplomacy, paradiplomacy, protodiplomacy, NGO and advocacy diplomacy).

The aim of this module is to understand and assess the global economy and the political debates and forces that shape it, with a specific focus on trade. Students are introduced to the history of the global economy and then the main theoretical approaches for understanding how it has evolved, such as liberalism, mercantilism and Marxism along with other approaches such as gender and environmental theories. These are applied through the exploration of a number of topics with trade being a common theme throughout.

The module looks at the role of the state, non-state actors, the global financial system, the governance of the global economy and trading system, and concludes with an examination of how the global economy and trading system are shaped by long and short-term crises in the environment, health, and security. Students will be placed into small teams to study an individual country over the duration of the module. Within each team, students will pick a specific topic to focus on from a list provided by the module leader. They will present on this topic when each team delivers a presentation about their country at the end of the teaching period. Each student will be assessed on their individual contribution to the presentation. Students will have to refer to their assigned country in the open-book timed essay.

The aim of this module is to understand the main features, concepts and practices of international negotiations. It provides an overview of the most important elements of negotiation and offers an application to a number of case studies.

Politics in Times of Crisis

The aim of this module is to equip students with the knowledge, understanding and skills necessary to appraise and assess the relevance of politics for their professional futures. Building on core theoretical and conceptual foundations of the study of politics, the course will proceed by active student engagement with case studies of political developments (including crisis). Students will develop the skills required to recognise and act upon this complex operating environment.

The aim of this module is for students to understand the conceptual tools of Foreign Policy Analysis (FPA), acquire specific knowledge relevant to an understanding of the foreign policies of key state actors in the global arena, and develop awareness of the issues and policy contexts that shape these policies.

The BRICS and the Changing World Order

The BRICS (Brazil, Russia, India, China and South Africa) and the Changing World Order aims to introduce students to the way the rise of the BRICS at the turn of the 21st century has come to challenge the Western-led order in world politics. The module will focus on each of the five BRICS countries and investigate how the evolution of their domestic and foreign policies has influenced their rise in world politics.

The past forty years has witnessed an unprecedented growth in cities in both the developed and developing world. This module will introduce students to the concepts and theories of global cities and the politics, governance, economics, society, security and international relations issues connected to them. The central case study will be London, but students will research other cities to examine the main debates and controversies surrounding cities and their place in the world.

The module will explore such issues as how to define 'global cities¿, the history of cities in international relations and economics, the social, infrastructure, economic and governance pressures facing cities, the role of cities in international security and in diplomacy (for example, the concept of 'paradiplomacy¿ or 'city diplomacy¿). This course will allow students to understand the role of cities in global politics. The course will also allow students to better understand London, the city they have chosen to study in, and some of the cities most of them will spend their lives living and working in.

The module introduces issues around media and social movements, by tracing the theoretical evolution of media and social movements, understanding media within broader social movements in historical processes rather than merely focusing on media technologies or impact media. The model seeks to cover topics on control of media systems on different parts of the world, alternative media practices, media ecologies, networks, and social media. Whilst focused on grassroots or community activism, it considers the relationship between media, protest and democracy. The module uses a series of case studies to understand how diverse groups harness media to articulate their political voice.

The aims of this module are to provide business awareness regarding

The aim of this module is to understand the role that sport plays in political and diplomatic issues at a national and international level. Using contemporary examples from developed, transitioning, developing, and fuel-based economies, the module will explore how sport can be used to positive (e.g., facilitating socio-economic plans) or negative (e.g., whitewashing human rights violations) ends. In doing so, the module aims to promote a critical, evidence-based understanding of the interplay between sport, politics, and diplomacy.

The aims of this module are to give the student the opportunity to study a subject, business problem or research question in depth and to research the issues surrounding the subject or background to the problem.
The module will equip the student with the relevant skills, knowledge and understanding to embark on their individual research project and they will be guided through the three options available to them to complete their dissertation:

Students will achieve a high level of understanding in the subject area and produce a written thesis or project report which will discuss this research in depth and with rigour.

How you'll be assessed

You can expect to complete essays and reports of varying lengths, as well as presentations, proposals and pitches in some cases. Time-limited assignments may form a small part of the assessment mix.

Alongside our regular teaching schedule you will also have the opportunity to take part in guest lectures and projects on a range of topics.

Based on our London campus, you will have access to all the facilities within our building, plus opportunities to learn outside the campus throughout your studies with us. 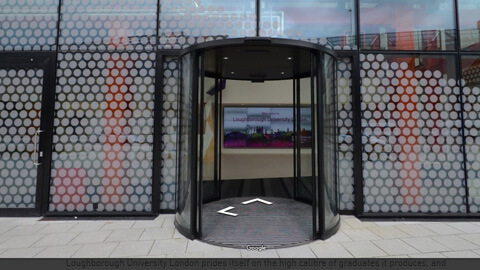 A 2:2 honours degree (50% in final year), or equivalent international qualification, in any subject area.

Students are required to have a bachelor degree (4 years) for entry to a postgraduate programme. The University uses the Shanghai Academic Ranking of World Universities to identify the required final mark, as outlined on the table below:

The University will consider students from Affiliated Colleges in the following way:

Applicants from colleges affiliated to universities in the top 250 Shanghai rankings will be considered if they have achieved or are likely to achieve final marks of 75%-84%.

Applicants from colleges affiliated to universities which are 251-500 in the Shanghai rankings will be considered if they have achieved or are likely to achieve final marks of 80%-87%.

Applicants from colleges affiliated to universities which are above 500 in the Shanghai rankings will be considered as follows:

Applicants from a small number of Chinese universities that specialise in business, management, finance or creative arts will be given special consideration by the University. The full list of these universities and the Shanghai band under which they will be considered can be found below:

‌*Special consideration for programmes in School of Sport, Exercise and Health Sciences and Institute for Sport Business only.

Students who do not meet the above requirements may occasionally be considered if they have a relevant degree, can show good grades in relevant subjects, and/or have substantial relevant work experience.

Applicants must meet the minimum English language requirements. Further details are available on the International website.

To be confirmed Full-time degree per annum

Fees are reviewed annually and are likely to increase to take into account inflationary pressures.

The fee stated is for a full-time student undertaking a master’s programme of 180 credits. Part-time students should divide the published fee by 180 credits and then multiply by the number of credits they are taking to calculate their tuition fees.

Find out more about tuition fees and funding on lboro.ac.uk

Loughborough University London prides itself on the high calibre of graduates it produces, and provides great opportunities for you to develop the skills and attributes you need to progress successfully in your chosen career.

Loughborough University London is the first of its kind to develop a suite of careers-focused activities and support that is positioned as the underpinning of every student’s programme. Opportunities include group projects set by a real businesses and organisations, company site visits and organisation-based dissertation opportunities.

The Institute offers high-quality masters programmes taught by outstanding teaching staff and professionals that are well connected within their field. You will benefit from the guidance and tuition of an internationally renowned academic team with expertise in the teaching of diplomacy and other related disciplines.

The careers and employability support on offer at Loughborough University London has been carefully designed to give you the best possible chance of securing your dream role.

Graduates of this programme will be equipped with the skills and knowledge required to pursue careers in international business, business and corporate diplomacy, negotiations and political analysis for government, international organisations, non-governmental bodies, and business alike. Graduates will also have the opportunity to enhance their knowledge and career prospects further by undertaking a PhD programme.