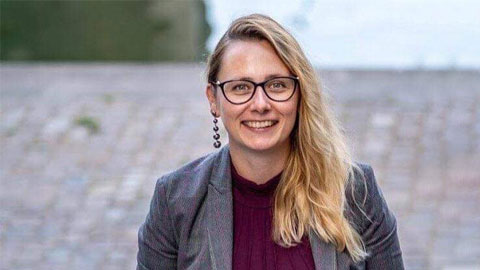 Dr Dorina Baltag's research interest lies at the intersection of the fields of International Relations and European external relations with focus on the practice of diplomacy.

Dorina has joined the Institute for Diplomacy and International Governance in November 2019 as result of the Excellence 100 Doctoral Prize awarded to her through which Loughborough University is selecting 100 outstanding academics across a wide range of disciplines to advance their career.

Her research addresses questions related to foreign policy and diplomacy and to organisational management and performance specifically in European Neighbourhood Policy (ENP) countries.

Dr Dorina Baltag obtained her PhD degree from Loughborough University in 2018. To conduct this research she was awarded a Marie Curie Fellowship by the European Commission and a Research Studentship by the School of Social Sciences and Humanities at Loughborough University. On her academic trajectory, Dorina obtained a Research Master in European Studies from Maastricht University (MSc cum laude), a BA in International Relations from Moldova State University (top 5%), and spent one Research Year in European Studies at the Jagielonian University in Poland and one Undergraduate Exchange Year at the University of Georgia, School of Public and International Affairs in the USA.

During her doctoral research Dorina contributed to the Routledge Handbook on the ENP (2018: Routledge, Oxford), the External Governance as Security Community Building (2016: Palgrave, London) and co-edited the European Union and Central and Eastern Europe: Assessing Performance (2018: Routledge, Oxford). Her work has been published, in among others, in the Hague Journal of Diplomacy (2018), Studia Diplomatica (2017), East European Politics (2017), EIoP (European Integration Online) papers (2015), NUPI (Norwegian Institute of International Affairs) working papers (2014).

Prior to joining the Institute, Dorina was involved in research and teaching activities in Belgium and the Netherlands. She has obtained the UACES NORTIA Bursary and was a fellow at Kent University (Brussels) where she developed research collaborations between academia and practitioners from EU institutions. Between 2015-2019 she was involved in teaching European Studies in the Bachelor and Master European Studies Programme at Maastricht University. She taught courses as well as has supervised MA and BA thesis on EU external relations (with focus on EU diplomacy and the ENP), EU public policy and International Relations, Negotiations as well as Interviewing skills and Qualitative Methodology.

Within the Excellence 100 two year scheme, Dr Baltag's research strategy focuses on consolidating the 'practice turn' in IR and EU studies as a research agenda in EU diplomacy and, hence creating synergies between organisational management, diplomatic studies, and the practice approach. This will be supported by the following research outputs:

Dorina is interested in building bridges between entrepreneurship and academia. In 2018-2019, Dorina was the project leader for Entrepreneurial Thinking for Early-Career Female Researchers at Maastricht University which was awarded the Diversity and Inclusivity Grant. To follow her activities on this, see The Knowlet.

She is a member of various professional organisations including UACES, the ISA, NORTIA and the EUSA. To keep up to date with Dorina’s latest research and related activities, you can follow on her on LinkedIn, and Twitter.