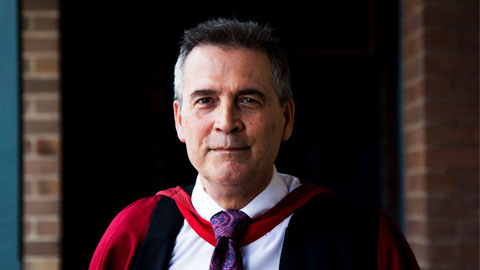 Professor David Rowe will be visiting our campus from Western Sydney University to deliver a lecture to students and staff on ‘Making the Play, Minding the Screen: Ownership, Control and Use of Media Sport’.

Ownership and control of sport and media have long been sources of contention among industries, governments and fans.  These are not routine matters of market share and consumer access.  Deepening co-dependency has created a powerful sport-media nexus within contemporary global, transnational, national and local cultures.  Sport is a form of popular culture that excites high passions and, crucially via the media, features prominently in everyday lives.

Open to all current students and staff, this lecture will trace the development of a mutating ‘media sports cultural complex’ produced out of physical folk play and transformed into a vehicle of national mythology and capitalist sportainment. David will discuss the tensions between economic imperatives and rights of cultural citizenship that are accentuated by the rise of networked media sport. Despite its shiny new digital appearance, old-fashioned questions of ownership and control remain, it is argued, central to what is played, who gets to see it, and who benefits materially from mediating sport.

Professor David Rowe is an Emeritus Professor of Cultural Research, Institute for Culture and Society at Western Sydney University, Australia. He has published extensively in the areas of media and popular culture, especially sport, music and journalism, and brings substantial international research experience to the Institute, serving as a peer reviewer/editorial advisor for more than 20 scholarly journals and for several national research councils.

His books include: Popular Cultures: Rock Music, Sport and the Politics of Pleasure (1995), Globalization and Sport: Playing the World (2001), Sport, Culture and the Media: The Unruly Trinity (second edition, 2004), Global Media Sport: Flows, Forms and Futures (2011), Sport Beyond Television: The Internet, Digital Media and the Rise of Networked Media Sport (2012), and Sport, Public Broadcasting, and Cultural Citizenship: Signal Lost? (2014).  A frequent commentator in the media on social and cultural issues, his work has been translated into many languages, including Arabic, Chinese, French, Italian, Korean, Spanish and Turkish.