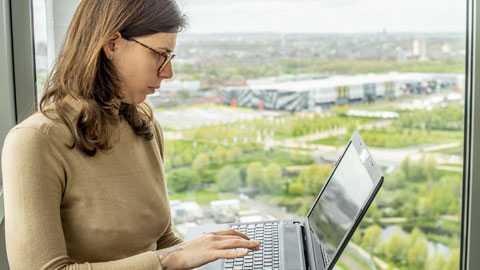 The event will be hosted online and all are welcome to attend.

The Drivers and Dividers of EU Diplomatic Practice in Moldova, Ukraine and Belarus

Dr Dorina Baltag is a post-doctoral researcher within the Institute for Diplomacy and International Governance, appointed as result of the Excellence 100 Doctoral Prize awarded to her. Her research interest lies at the intersection of the fields of International Relations and European external relations with focus on the practice of diplomacy. Her research addresses questions related to foreign policy and diplomacy and to organisational management and performance specifically in European Neighbourhood Policy (ENP) countries. With her research Dorina contributed to the 'Routledge Handbook on the ENP' (2018: Routledge, Oxford), the 'External Governance as Security Community Building' (2016: Palgrave, London) and co-edited the 'The European Union and Central and Eastern Europe: Assessing Performance' book (2018: Routledge, Oxford). Her work has been published, in among others, in the Hague Journal of Diplomacy, Studia Diplomatica, East European Politics, EIoP (European Integration Online) papers, NUPI (Norwegian Institute of International Affairs) working papers. Prior to joining the Institute for Diplomacy and International Governance, Dorina was involved in research and teaching activities in Belgium (Kent University, Brussels) and the Netherlands (Maastricht University).

Dr Paul Maddrell is Lecturer in International History at Loughborough University. He previously taught at Aberystwyth University and, before that, at Salford University. His particular fields of expertise are 20th-century international, and especially German, history, and intelligence and security. He has published (as sole author) Spying on Science: Western Intelligence in Divided Germany, 1945-1961 (Oxford: Oxford University Press, 2006); (as editor) The Image of the Enemy: Intelligence Analysis of Adversaries since 1945 (Washington, DC: Georgetown University Press, 2015); and (as co-editor) Spy Chiefs, 2 volumes (Washington, DC: Georgetown University Press, 2018). He has also published many journal articles and book chapters, has written short articles for the press and been interviewed by newspapers, BBC Radio and television companies. He is a Fellow of the Royal Historical Society and of the Higher Education Academy and a member of the editorial board of the International Journal of Intelligence and CounterIntelligence.