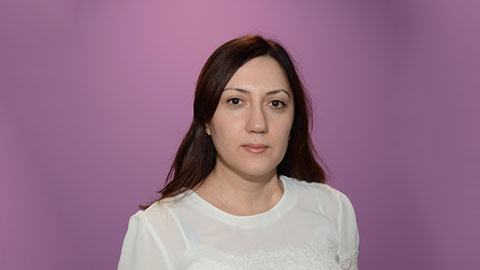 Dr Tatevik Mnatsakanyan’s research and teaching are in international security, with a particular emphasis on critical approaches to security and to peace-building and postconflict reconciliation.

Informed by her inter-disciplinary background, she draws on political theory and philosophy, cultural studies, linguistic and sociological approaches to interrogate changing modes of “sovereignty”, “security”, political violence, and their relationship to forms of resistance. These uniting themes run through Tatevik’s research in two more specific and substantive subject areas: political contestations around UK and US pursuance of “war on terror” over the past decades; and multiple forms of the politics of denial, in particular, genocide denial with implications for postgenocide reconciliation.

Tatevik joined the Institute for Diplomacy and International Governance in 2016, after completing her PhD in Politics (International Relations) at the University of Exeter, UK, in 2015. She has a multi-disciplinary background with previous degrees in International Studies, Diplomacy, as well as Linguistics and Area Studies. Before joining Loughborough University London, Tatevik taught International Relations in the Department of Politics, University of Exeter. Before embarking on her PhD, she gained several years of experience working for the World Bank Yerevan Office and the Embassy of Armenia, London. Such non-academic work experience combined with her academic studies across disciplines informs her current teaching and research.

Tatevik’s research is in international security, with a particular emphasis on critical approaches to security and to peace-building and postconflict reconciliation. Inspired and informed by her inter-disciplinary background, she  draws on political theory and philosophy, cultural studies, and linguistics and sociology, to interrogate political contestations around “security” and what this means for changing modes of “sovereignty” and “subjectivity” and thereby resistance and possibilities for political transformation. Substantively, her work is on the UK and US pursuance of “war on terror” over the past decades and how this has shaped and been shaped by encounters with anti-war resistance and critique. Theoretically, this research builds on the works of linguistic philosopher Mikhail Bakhtin and psychoanalyst  and political thinker Julia Kristeva. A second strand of her research is in Genocide Studies, aiming to animate a dialogue between the fields of Genocide Studies and International Relations previously somewhat disengaged from each other’s debates. In this work, drawing on Giorgio Agamben’s political thought, and through a conjunctural postcolonial lens, she brings Critical International Relations theorisations on “sovereignty,” “violence,” and “subjectivity” to bear on interrogations of genocide denial, and postgenocide reconciliation.

Tatevik gained several years of teaching experience at the Department of Politics, University of Exeter, during and after completion of her PhD, before joining Loughborough University London.

On “war on terror” and political and societal negotiations of security/insecurity. This is pursued through the book project,  titled The Carnivalised Subject of “War on Terror”: Carnivals of Resistance and Terror, and Transmutations of a Long War. This book argues that we should conceive of “war on terror” not as a series of government policies and practices but as a multi-layered contested space where “sovereignty”, “security”, and “subjectivity” have been under continuous and unfinished re-negotiation. Theoretically, this book draws on the philosophy of Mikhail Bakhtin, and thought of Julia Kristeva to critique predominant post-structuralist approaches to security, and develop a relational framework taking seriously the constitutive encounters across domains of official legitimation, critique and anti-war resistance. Moving beyond the question how “war on terror” was initially constructed and legitimised, the book asks why “war on terror” endured and transmuted into new forms, despite significant public critique in both countries.

Second is on multiple forms that the politics of denial takes, in particular on genocide denial and its implications for reconciliation, diplomacy and mediation. This is pursued through work aiming to theorise and locate forms of denial in the politics of security; as well as through work contributing to the emerging debate on the idea of “postgenocide” and postgenocide reconciliation. In the latter, she advances the notion of “generative denials”, where she links both genocide and genocide denial with continued re-negotiations of “sovereignty” and forms of subjectivity. She explores what this means for postgenocide reconciliation and political transformation, with a substantive emphasis on postgenocide denial and political repressions in Turkey, and possibilities for Turkish-Armenian reconciliation.

Tatevik is currently working on:

Tatevik currently co-supervises (along with her colleague Christina Oelgemoller) one PhD student whose research is on the politics of migration through a postcolonial lens, on the case of Nigeria.

Tatevik has proposed and will convene an IDIG series of events titles Dialogues in Peace. Dialogues in Peace will periodically bring together Loughborough and external scholars working within conflict and peace studies, and various practitioners involved in conflict, peace, and reconciliation, in order to engage in productive dialogues and conversations around specific challenges, themes, and cases; to generate new ideas, and forge new collaborations.  As a result, it aims to further the research and teaching in conflict and peace at IDIG by enriching student experience; and to generate ideas and collaborations for new research projects and initiatives across disciplines and institutions.Tatevik annually contributes to, and has helped in the organisation of, the Gregynog Ideas Lab, a programme of events by a collaborative network of scholars working on various facets of international politics from a range of critical, postcolonial, feminist, post-structural and psychoanalytic traditions.